Hi all, R2 here!  I am starting a new SWTOR blog that will capture some of my random thoughts on the game.  I will update when I can!  For now, I will describe my history with SWTOR.

I started playing SWTOR since closed beta in July 2011.  The hype for the game was tangible with the myriad of fan sites and podcasts already out back then!  Needless to say, getting into the closed beta was a wonderful opportunity for me. 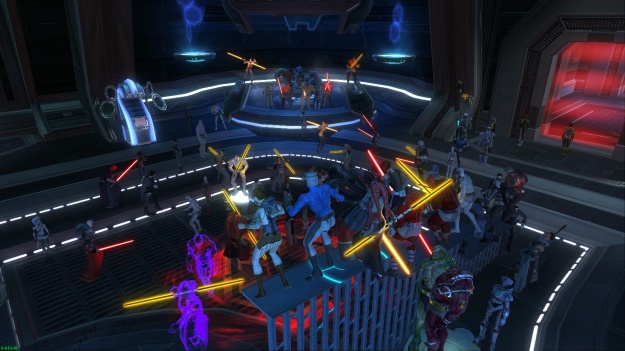 End of Beta Party – Guess who the shirtless Chiss is!

At that time, I was a member of The Jedi Academy gaming community centered around Star Wars:  Jedi Outcast and Star Wars:  Jedi Academy video games.  The community is still around, but not as active anymore since the games are outdated.  As the name suggests, this community was a place conducive to teaching players how to play both games.  Members of the staff would hold classes teaching various lightsaber forms and game play modes.  The servers were filled with players waiting in line at the dueling mats!  I used to be an instructor for the dual sabers class and helped manage the community’s competitive Team Free For All (TFFA) team.

The Jedi Academy community was quite interested with SWTOR and expanding to it.  We set up two guilds, one for US and one for EU.  I was a co-lead for the US guild on Jedi Covenant (convenient server name!).  At launch in December 2011, a lot of community members started hopping into the game and playing through their class stories.  Everyone was playing at their own pace, but we all socialized while leveling.  Once most members hit the level cap on their first toon, they started to lose interest in the game or just didn’t have time for it.  Back then, the end game content was limited.  We organized Flashpoint runs and were able to field a team each week for them, but we never had enough activity for an op.  On the other hand, the EU guild was having better luck and a lot more participation.  I remember watching their live stream of Eternity Vault.  So proud of them!

As I foresaw and expected, the US guild was declining despite my efforts and the efforts of my officers.  I started having a lot of work trips mid way in 2012 and steadily lost interest in the game too.  After about a year of playing the game, I was disappointed with where the guild was and felt dragged down about what to do about it.  I decided to take a break from SWTOR and returned to playing various other games, such as Lord of the Rings Online (Rise of Rohan expansion) and various single player games gathering dust in my Steam library (who doesn’t have that problem?!).

I sporadically played SWTOR in 2013.  The US guild I was a member of was basically no more at that point.  When I heard about Galactic Starfighter and somehow got into the closed beta for that too, I returned to the game.  At that point, I decided to look for another guild to join.  In December 2013, I joined Pillars of Ashla on Jedi Covenant and am happily still there!  Pillars of Ashla does just about everything in the game but not in a hardcore manner which suits me rather well.  Unlike most guilds I’ve seen, Pillars has a well-structured charter outlining the rules and responsibilities for members and officers.  My first time raiding in SWTOR was with Pillars of Ashla!  The guild last year consistently made the Top 10 on the Guild Conquest Leaderboard.

Pillars of Ashla – 3rd place on the conquest board!

I have not taken another large break from SWTOR after joining Pillars.  Unlike most people in the game, I used to focus on only one character, my Jedi Guardian, Yajard.  I’ve slowly been creating new characters to experience the other class stories.  I now have a Scoundrel, Sage, and Mercenary!  The momentum within SWTOR was picking up pace last year and hope it continues into this year.  More story content is something to look forward to, but I hope it doesn’t mean little to no updates for the rest of the game.  I’m very optimistic about SWTOR and intend to play the game for quite a while!

Now that my SWTOR life story is over…  a little more about this blog!  I will be writing anything that is in my thoughts regarding SWTOR.  I don’t intend to hit on all of the “hot topics” and summarize in-game updates.  I’ll pick a topic and just write about it.  I intend to keep future posts short and sweet, with a little humor mixed in.  I’m planning my second blog post to focus on the “dilemma” of who to guard in operations.  I’ll talk about the obvious game mechanics behind who you should choose and then my thought process on how I make it subjective too.

For now, signing off, with a picture of my Imperial Agent at the end of SWTOR beta. 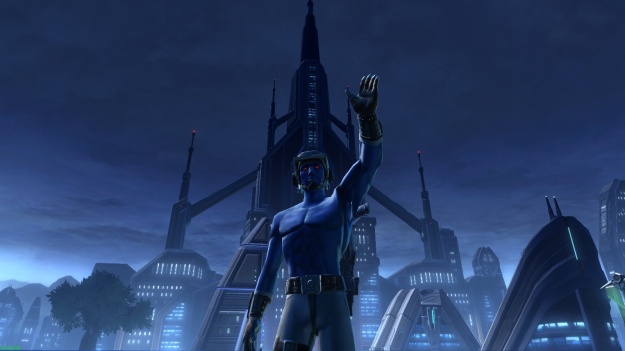 Past Posts by Month